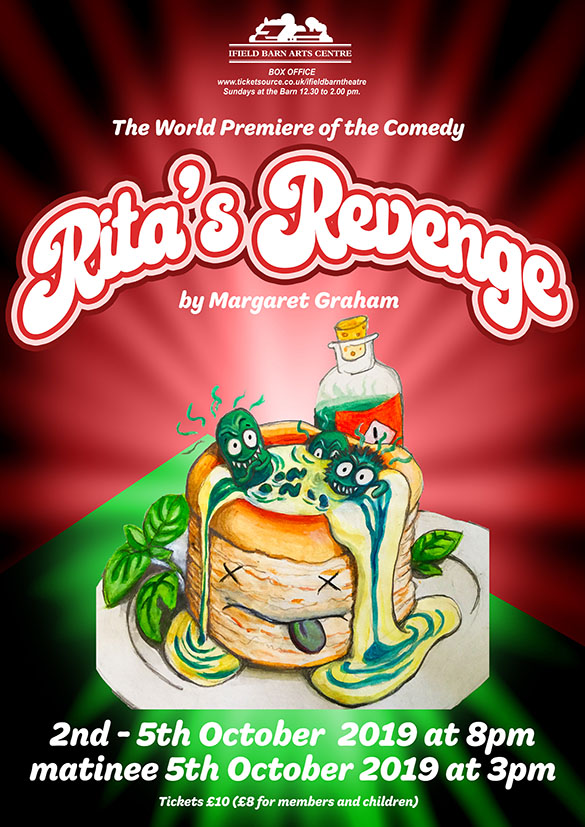 Rita’s Revenge is partly a spin-off from Margaret Graham’s ‘guesthouse’ plays, but if you haven’t seen them, don’t worry – it stands firmly in its own right too.

We will be following Chris/Rita and her fellow cast members through their chaotic rehearsals under the eccentric and bossy director, Mrs James …

… Will precious, method-actor Tim manage to embrace the role of

Who is Dot/Glamorous Gloria pulling apart behind the scenes?

What ludicrous excuse will Fred next send to explain his absence?

Will Mrs James manage to control her temper and resist that shocking expletive right to the end?

… And what is that weird-looking pastry on the poster all about?

Book early and see for yourself.

It seems that many at Ifield Barn remember and feel an affection for the two 1960’s ‘Guesthouse’ plays written by Margaret Graham – Miniskirts & Revelations (2013) and its sequel Flowery Shirts & Strange Relations (2015). They were performed to full houses and each gained a NODA award.

We saw in Flowery Shirts that the Mum, Chris, was sloping off to the village hall to play the lead in Rita’s Revenge (she thought ‘Grandma’ wouldn’t approve). At home Chris secretly rehearsed with lodger Ivan, holding a realistic-looking play book. Margaret had mocked up this prop – the back cover complete with summary and accolades.

Later some of the cast told her that they liked the look of the play and asked “Can we do it?” They took some convincing that the play didn’t actually exist! However, a few continued to nag Margaret for years until, after Benches (2017), she finally gave in and wrote it. The result is that this October (2nd to 5th) Margaret and Co-Director Joy Buchan intend to lift Autumn spirits with a flavour of late 1960s attitudes, music, fashions- and hopefully some good old belly-laughs.

Rita’s Revenge is partly a spin-off from Margaret Graham’s ‘guesthouse’ plays, but if you haven’t seen them, don’t worry – it stands firmly in its own right too.

We will be following Chris/Rita and her fellow cast members through their chaotic rehearsals under the eccentric and bossy director, Mrs James …

… Will precious, method-actor Tim manage to embrace the role of

Who is Dot/Glamorous Gloria pulling apart behind the scenes?

What ludicrous excuse will Fred next send to explain his absence?

Will Mrs James manage to control her temper and resist that shocking expletive right to the end?

… And what is that weird-looking pastry on the poster all about?

Book early and see for yourself. 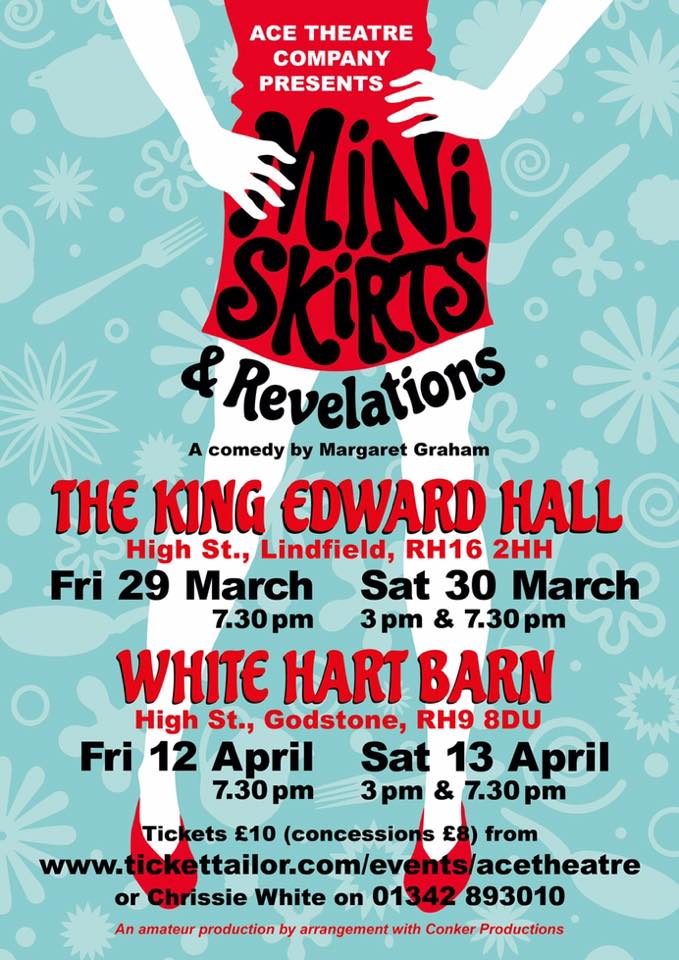 A GREAT PLAY: The White Hart Barn was packed out on Saturday night as enthusiastic members of the audience took their seats to watch the latest ACE Theatre Company’s play.

… there was a lot of humour in the script and the author had captured the fun and change that came with the Sixties and Seventies … the interaction between Mick and sister Penny was so natural one could have believed they were related.

The interval was fun as well … one could enjoy a glass of wine while sharing memories of those bygone years.

The set was amazing, down to the Aga stove, costumes were fun and a good reminder of how hemlines and trouser widths changed in those years.

Thank you for another amazing play, excellent production, cast and scenery. We thoroughly enjoyed it.

The play on Saturday night was brilliant with excellent performances all round. Both Mum and I thoroughly enjoyed it.

Danae Bird (Caterham on the Hill)

A quick note to say how much we enjoyed the show!! A wonderful performance from all the cast … which brought back memories … amidst lots of laughs and gasps … especially of the topless pose!!!

… And you made a lovely Grandma too.

Congratulations … it was good fun to watch, it evoked a lot of memories of that time (I remember waiting with baited breath for the next edition of the Jackie magazine!).

I was watching and tuning in to the audience’s response. They laughed so much! Some shed a tear (including me, over Grandma mostly) Rotter Grandad was actually booed as he made his exit through the audience! I could see and sometimes hear the audience anticipating the joke or horror to come.

Seeing the story I’d written unfold again … plus the palpable enjoyment of the cast as well as the audience made me see it all afresh and was an absolute delight.

Well done everyone at ACE! You made this old lady very happy!

This site uses cookies. By continuing to browse the site, you are agreeing to our use of cookies.

We may request cookies to be set on your device. We use cookies to let us know when you visit our websites, how you interact with us, to enrich your user experience, and to customize your relationship with our website.

Click on the different category headings to find out more. You can also change some of your preferences. Note that blocking some types of cookies may impact your experience on our websites and the services we are able to offer.

These cookies are strictly necessary to provide you with services available through our website and to use some of its features.

Because these cookies are strictly necessary to deliver the website, refuseing them will have impact how our site functions. You always can block or delete cookies by changing your browser settings and force blocking all cookies on this website. But this will always prompt you to accept/refuse cookies when revisiting our site.

We fully respect if you want to refuse cookies but to avoid asking you again and again kindly allow us to store a cookie for that. You are free to opt out any time or opt in for other cookies to get a better experience. If you refuse cookies we will remove all set cookies in our domain.

We provide you with a list of stored cookies on your computer in our domain so you can check what we stored. Due to security reasons we are not able to show or modify cookies from other domains. You can check these in your browser security settings.

These cookies collect information that is used either in aggregate form to help us understand how our website is being used or how effective our marketing campaigns are, or to help us customize our website and application for you in order to enhance your experience.

If you do not want that we track your visist to our site you can disable tracking in your browser here:

We also use different external services like Google Webfonts, Google Maps, and external Video providers. Since these providers may collect personal data like your IP address we allow you to block them here. Please be aware that this might heavily reduce the functionality and appearance of our site. Changes will take effect once you reload the page.